At the end of January, two members of the Queen’s University team, Philippe and Marie, went to TUNL (Triangle University National Laboratory in North Carolina) to estimate the quenching factor of the gas mixture used in the experiment. 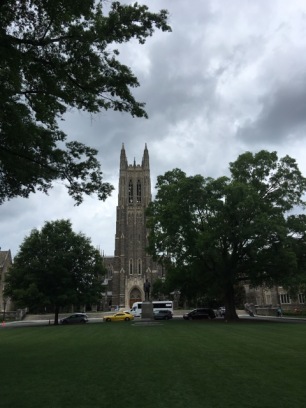 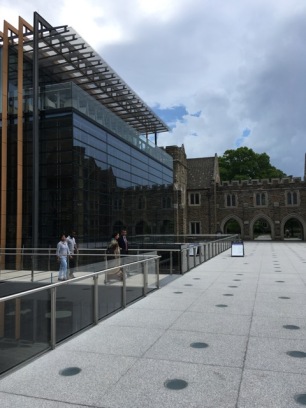 Light Dark Matter and coherent neutrino scattering (CEνNS) detection relies on the interaction with nuclei from the gas mixture, producing nuclear recoils. However, the energy calibration of detectors is done using gammas sources, producing electronic recoils. An electronic recoil and a nuclear recoil of the same energy interact differently in the medium, thus don’t appear to deposit the same amount of energy. Enter the quenching factor, a scale used to convert the nuclear recoil observed into its “real” energy.
In order to measure the quenching factor, one needs to have nuclear recoils of known energy. One of the best sources of nuclear recoils are neutrons. The TUNL facility has an accelerator that can produce a pulsed neutron beam of known energy.

Inside view of the Van der Graaf accelerator.

The nuclear recoil energy depends on two quantities, the incident neutron energy and the scattering angle of the neutron. The latter is known by using backing detectors recording scattered neutrons.

For the experiment, Philippe and Marie used the smallest detector of the NEWS-G collection : a 15 cm diameter sphere made of aluminum filled with 2 bars of Neon. It was then placed in the neutron beam, before waiting for nuclear recoils events. 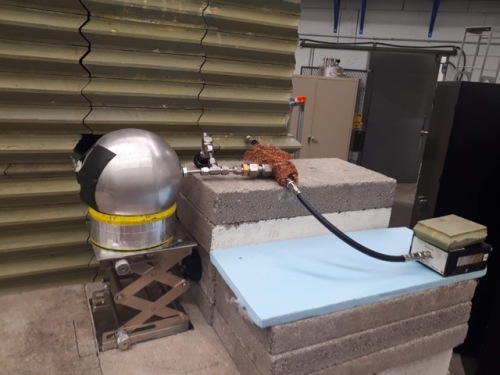 The 15cm detector used for the experiment at TUNL.

Over the winter campaign, 8 energy points were recorded, going from 6.7 keVnr to 0.3 keVnr. While the spring campaign collected 4, going from 28 keVnr down to 5 keVnr.
Those data are providing an essential calibration that the NEWS-G collaboration will use for the next experiment in SNOLAB. 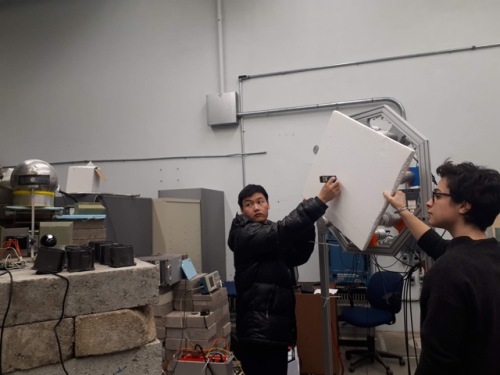 Long Li, graduate student at Duke and Marie Vidal, recording the distance between the backing detectors and the SPC.

Exploded view of the detector to be installed at SNOLAB

Spheromania II (SPC made out of LEP RF cavities)