The NEWS-G collaboration gathers physicists from around the world interested in developing spherical gaseous detectors or SPCs (Spherical Proportional Counters) for various particle physics applications. Originating from a 2012 symposium in Thessaloniki, the collaboration is led by Gilles Gerbier, holder of a Canada Excellence Research Chair in Particle Astrophysics at Queen’s University (Kingston, ON, Canada). 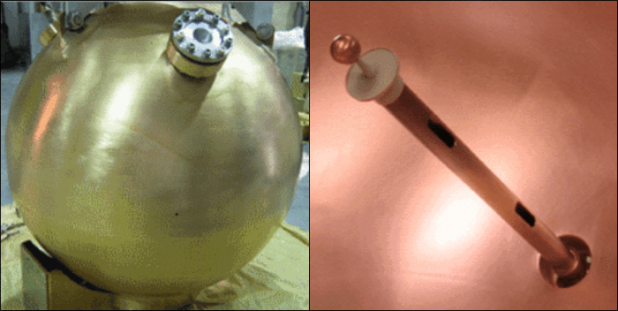 A 60 cm diameter SPC prototype made of high purity copper has been set-up at the Laboratoire Souterrain de Modane (LSM) by the IRFU and LSM teams. Initially intended to measure neutron energy spectra, the success of this experiment prompted it to be re-dedicated to search for low mass dark matter. Our recently published first results have already established a new world-leading constraint on the WIMP elastic scattering cross section for a WIMP mass of 0.5 GeV.

Our expanded collaboration is now building a 1.4 m diameter detector with improved shielding, lower backgrounds, and a lower predicted energy threshold. This will allow us to greatly improve our sensitivity in the GeV and sub-GeV dark matter mass ranges, in particular through the use of very light nuclei targets like helium and hydrogen from CH4 or other H-rich gases. This new experiment will be located at SNOLAB, the second deepest and the cleanest underground laboratory in the world.

Exploded view of the detector to be installed at SNOLAB

Spheromania II (SPC made out of LEP RF cavities)